CLOSE ENCOUNTERS OF THE CICHLA KIND

Cichla are pelagic fish that spend their lives swimming in open water. Even though they tend to swim near the banks of the rivers, they do not live in the littoral zone, they feed in it. In the deep, open, profundal areas.

If you could turn into a fish, which one would you choose to be? My first thought was an Altum Angelfish because it is one of my favorite fish but then I stopped and actually took the time to analyze this a bit better. Altum are extremely threatened in the wild, so it is not a good choice. Even though I also love Cardinal Tetras I definitely did not want to be one of those small fish that get eaten by most of the others; I definitely wanted to be on the top of the food chain. Next, I thought of piranhas, no, they sometimes eat carrion which normally gives me indigestion. Then, I thought wolf fish, no too aggressive to be me. What about an electrical eel? No, to electriky… Then, I thought of Cichla, hmmmm, which I could not find a con about, all pros. 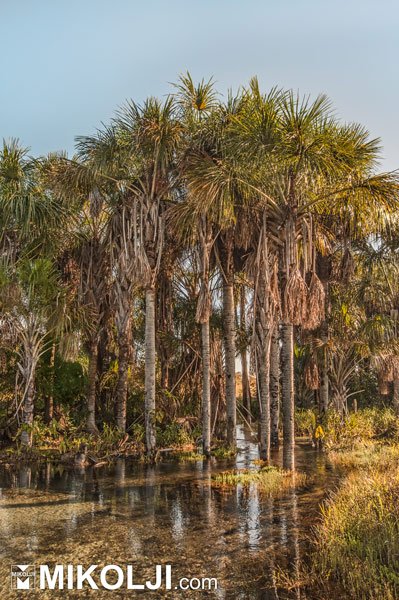 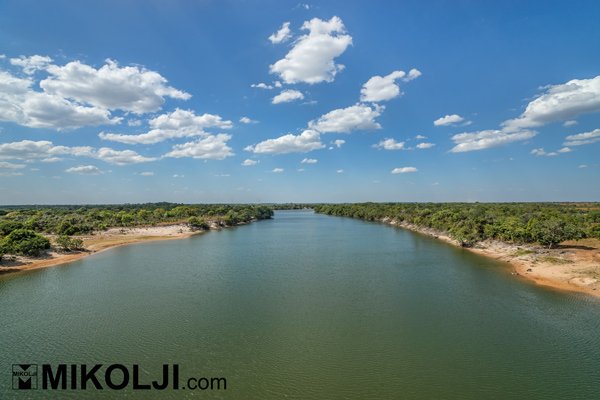 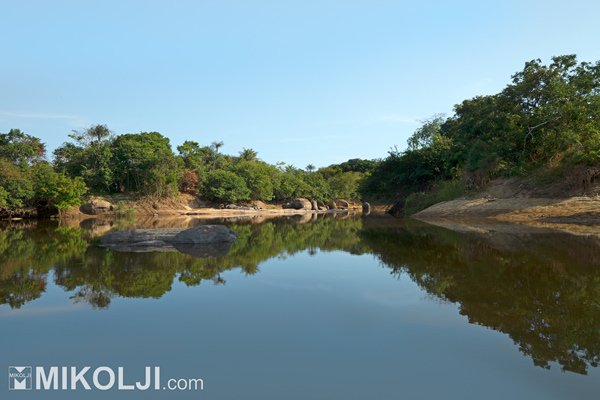 Cichla, is a genus of fish which are commonly referred to as Peacock bass and let me tell you, they are one of those fish that are always pleasant to see in the wild. They are actually the elegant fish, the fish that seem to have pedigree. They swim majestically, at the perfect speed, not fast, not slow. They are always doing their Cichla thing and do it perfectly. When they swim they swim with a plan, they know where they are going. Their body shape, beautiful colors and patterns is always a delight to observe. Compared to most fish, Cichla are quite shy. When you try to get close, most swim away but there is always one or two of them that are different, they are the curious ones. Those few Cichla are the perfect “models”, they come up to you and stare, analyze you. These are Close Encounters of the CichlaKind. Once they get bored of looking at you, they swim away, onward with their daily chores. There are around 15 species of them described up till this date, all restricted to South America. In Venezuela, we have five species, the most abundant and widespread being Cichla orinocensis. So, are these actually a dream aquarium fish? Yes, they are, and you can keep them, if you have a very large aquarium, no less than 2.4 meters long and 90cm in width. Here size matters, the larger, the better!

Cichla seem to have a territory, just like lions or other land predators and seem to know it by heart. Even though they tend to move into different habitats as they grow, they always keep a specific territory in those habitats. I have photographed specimens with specific traits year after year in the same locations. Cichla are born in large bodies of water like main rivers and lakes. Once they are over 15cm long, some of them migrate into smaller bodies of water, tributaries or inlets of these main rivers and lakes. There, they spend part of their life feeding and growing. Once they reach 35 to 40 cm in length they leave these small streams and inlets and go back into the main rivers again, never returning to them.

Cichla are pelagic fish which spend their life swimming in open water. Even though they tend to swim near the banks of the rivers, they do not live in the littoral zone, they feed in it. In the deep, open, profundal areas there is not much of a menu for them to choose from. The fish there are either too large or have strong defensive mechanisms. My observations conclude that Cichla live in the transitional area between the open water and the shore. So, if you were to imitate their habitat in an aquarium, would it only have to contain water? To some extent this is correct, although a Cichla biotope aquarium should be adapted depending on the size and age of the fish and if the final goal is just for looks, or if they want to be reproduced. A biotope aquarium for a gigantic Cichla is not the same as for a juvenile as we will soon explain further into the article. I have kept many different species of Cichla in various occasions and in general, a biotope aquarium for them needs large open areas with little or no decoration. The biotope aquarium decor will probably be more directed towards making the fish that will be living with the Cichla happy than the Cichla itself. Cichla need open water, lots and lots of water. The species of fish that will be placed in the aquarium to live with our Cichla is quite limited. Rays and some large catfish are probably the only options. Cichla in the wild are often found swimming with large Flag tailed prochilodus (Semaprochilodus kneri), large Banded cichlids (Heros severus), large Geophagus, large Satanoperca, and large Crenicichla. When I say large, I mean as large as the Cichla itself. Do not keep small Corydoras and other spiny catfish as Otocinclus with them, sometimes they get swallowed with tragic consequences for the Cichla. A good aquarium cover is also needed, fleeing fish will jump out of the aquarium. 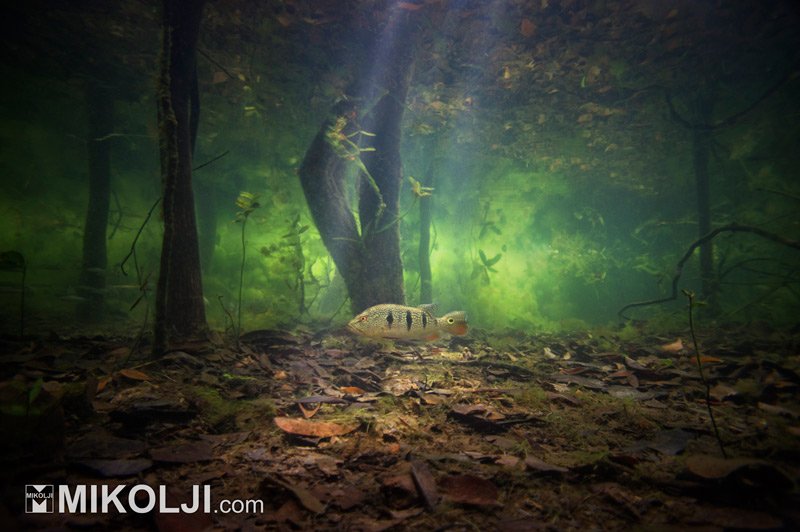 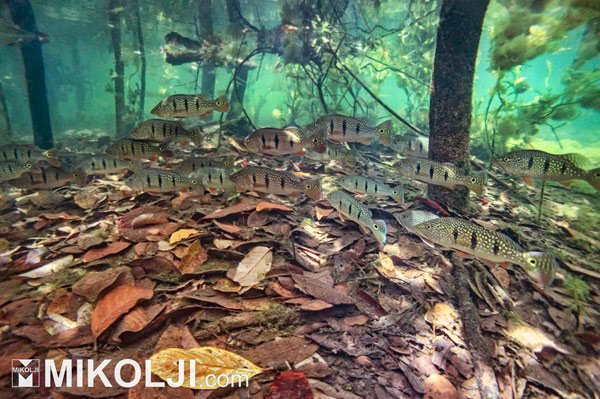 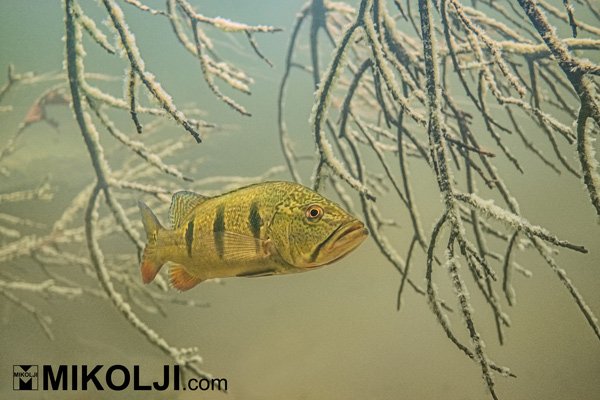 Cichla seem to do well in all sorts of water or aquatic ecosystems where they can find large amounts of food. I have spotted them in almost all of the streams I have visited all around the Orinoco River basin. In the dams and basins where they have been introduced, they seem to do great, as well. Examples of these introductions are the Everglades in the U.S.A. and the Coastal and Maracaibo Lake basins in Venezuela. Their most frequent water parameters are pH 5.5 to 6.5 and a temperature of 25 to 27 Celsius.

In Venezuela, they are the only freshwater fish that are protected by law. You are only allowed to keep 2 specimens when fishing. This protection has helped them from being overfished and can be found very often in the wild. Sometimes, I wonder why they are the only protected species, I think you get to see them too often, and then, understand, I get to see them often only because they are the protected ones. You see, protection and limitations sometimes make sense and work. Large individuals are mostly found alone or in couples, adolescent specimens often school in shoals of up to 20 individuals or more. The clearer the water the more they tend to school.

I have seen large females taking care of their young. It has to be one of the most impressive freshwater underwater scenes. Hundreds of 5 to 6 cm “kids” following their mom around, as she feeds. She then approaches the vegetated shallower river bank and quickly swims into the thick underwater jungle. This disturbs and frightens hundreds of small fish and shrimp which hide and/or live in the plants, making them flee into the open water. There, they become fish food, an easy catch for the hundreds of small Cichla. This is like homeschool, where an ongoing teaching process goes on. As the Cichla grow, they perfect their fishing skills. They learn how to ambush, which is also very fascinating to see. You can see a great shot of this behavior on: The Fish Guys Expedition 2 part 17 at 33:59 minutes https://www.youtube.com/watch?v=jVuO6OjoGmQ . When I shot that sequence of a juvenile Cichla orinocensis ambushing Rummy-nose tetras (Hemigrammus rhodostomus) in the wild, I was shocked. This is where hundreds of hours of underwater observation kick in and help you get the shot. What grabbed my attention to video was the Cichla swimming too slow and low to the ground. That immediately made me stop and observe it. As I said before, Cichla always swim the perfect way and if they are not, then something is not right, something is going on. So, the Cichla swam slow, and very close to the ground towards a piece of drift wood that was half buried in the sand. Once near the drift wood it completely changed its color and markings. It went from a nice array of colors to a dark brown, just as the drift wood. It then inspected the driftwood and found a hollow opening under it which looked like a “cave.” It then swam into this cave and disappeared. After a couple of seconds, it stuck out a bit of his head, just enough until he could see the passing fish. Because the “cave” only let him see in one direction that had no fish in sight, he decided to get out and wait on one side, right next to the driftwood where he could see fish coming from all directions. There he lay low almost motionless. Once he thought that the Rummy-nose tetras were in his range, he struck at lightning speed. Seeing the footage in slow motion teaches us thatCichla have a far range of strike ratifying that a large aquarium is a must. I had seen medium sized Cichla hiding behind aquatic plants before but never hiding behind driftwood to ambush its prey. 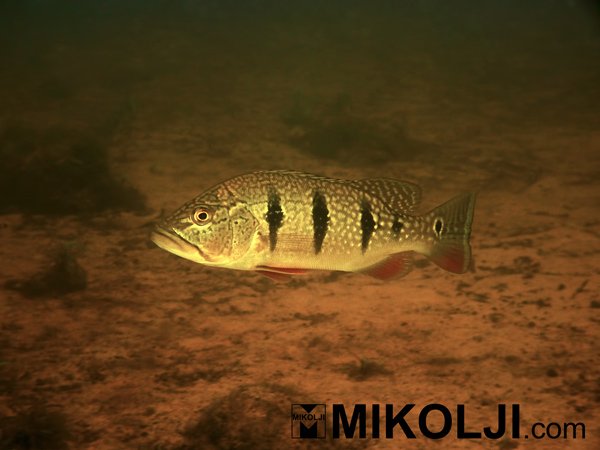 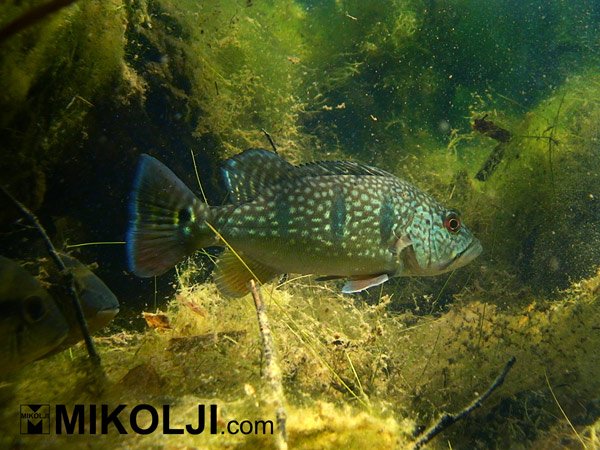 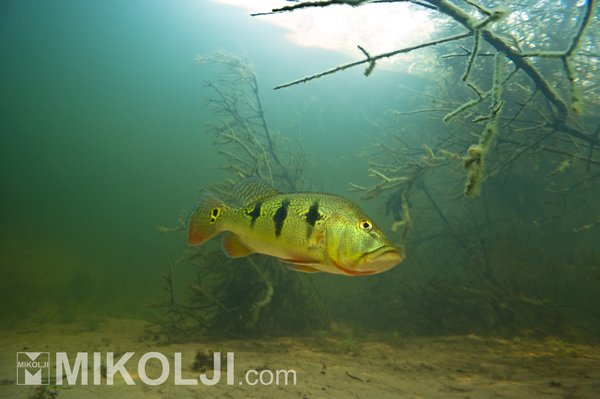 When thinking on keeping Cichla, you have to think LARGE. They require LARGE amounts of food and a very LARGE aquarium, because they grow very LARGE. I have seen too many tanks with thin skinnyCichla in them, starved by an “every other day” feeding. Cichla need one or two large feedings a day to keep their weight on. I remember visiting a public aquarium on one occasion and seeing a long skinnyCichla in one of their aquariums. As I pointed it out to one of the “managers” that was giving me the tour, he responded to me. “We call him the baseball bat.” Once he noticed that his comment was not humorous to me, he shamefully said, “We will start feeding him more.” That fish probably never recovered. Once a Peacock bass gets too skinny it is extremely hard to bring it back.

Cichla are also well known in the freshwater fishing community as great game fish. Locally, they are cherished by the indigenous people as an important subsistence food resource. Oh, I guess I just did think of a “con”, if you are hooked by a local in the wild, they for sure, will eat you! Even though people say that they are the best freshwater fish to eat, I personally find it a bit “dry”, Geophagus are way better.

This article has been published at:
• Practical Fishkeeping Magazine – October 2015 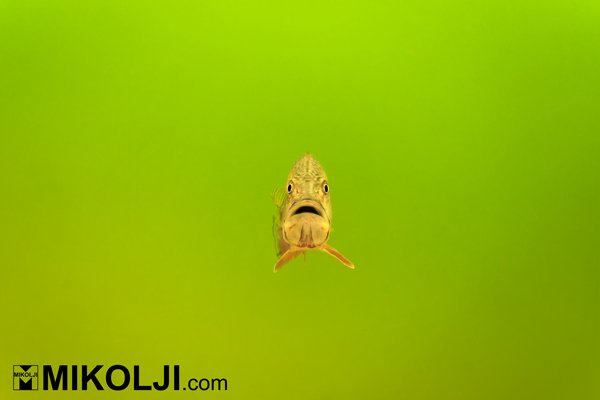