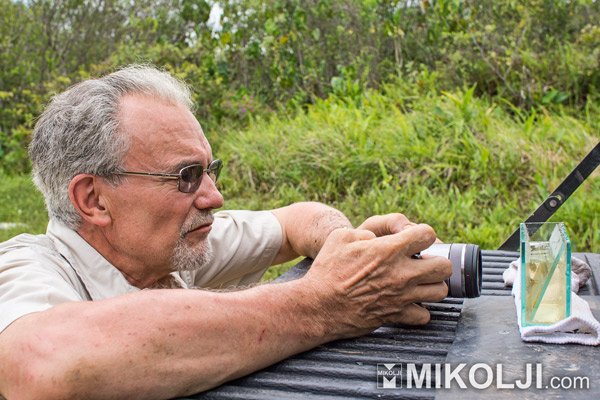 As I remember my trips to Venezuela with Ivan, I can do nothing but smile at the journeys.

My first trip to South America was in 1987 to the upper Amazon River in Iquitos, Peru. I believe this was the first collecting trip put together solely for hobbyists. Chuck Davis did the organizing. It was a two week trip; some people went on the first, some on the second, and some went both weeks. I remember Rosario LaCorte telling me that once you get the collecting/exploring bug into your blood, you can never get it out. Boy, was he right. Over the years, I have led numerous collecting trips with other hobbyists to Peru. Alone, taking advantage of my contacts as a tropical fish importer, I have visited Ecuador, Argentina, Eastern and Southern Brazil, and lately, my emphasis has been visiting Ivan in Venezuela.

Ivan used to run a tropical fish exporting company, so he knew everyone in the country who knew everything there is to know about its tropical fish. When the country’s logistics made exporting fish unfeasible, Ivan morphed from being an amateur photographer into more of a videographer. We changed from collecting fish with our dip nets to taking pictures, then later videos of the fish, of the aquatic animals and of aquatic plants of Venezuela in their natural habitats.

My favorite memories include buying half a beef carcass so we could experiment with a Caribe piranha feeding frenzy and surviving that said experiment even after feeling several piranha bounced off my chest. That spot is probably still our favorite filming location.

There was the trip where Ivan, Chan, MarcoandI climbed Chaviripa Falls to find fish what might be endemic to the top and we separated as while the others went down to try a different assent, while I stayed where I was. Picture me climbing across flat rock slabs too steep to go down while there was a 98ª temperature and a group of vultures circling overhead. Aahh, that is what memories are made of.  I reached the top, and miraculously met the other 3 who had also just made it.  When it was time to descend, Chan and I just took a more circuitous route while Ivan and Marco went down the river bed. Long story short, at about 4 pm, almost at the bottom, I collapsed from dehydration and could not proceed. Chan left me and found Ivan and Marco, whom brought water and dragged me back to camp.

On a different venue, Ivan and I twice drove to the Gran Sabana. This area is in Southeast Venezuela and it must be one of the most unique places on Earth. As the name implies, it is a very high plane, tropical in nature, filled with rivers, waterfalls, tepui (table top mountains) and ORCHIDS. This is a photographer’s paradise and each picture is a memory that will last a lifetime.